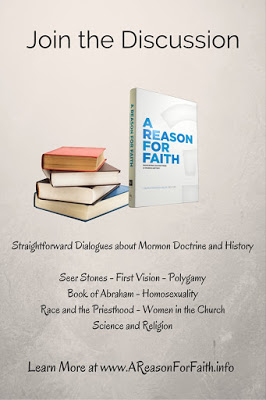 When I was in junior high school I attended a performance of Annie Get Your Gun that was put on by a nearby high school. I vividly remember the number “Anything You Can Do” because the actress playing Annie Oakley broke or sprained her ankle in the middle of the performance (she badly misstepped during the dancing). Of course, the opening lyrics to the song, famously, are, “Anything you can do, I can do better! I can do anything better than you!”

Basically, everything Runnells has done, Hales and her all-star team have done better.

It’s impressive the amount of talent Hales has brought into A Reason for Faith. Her roster includes: 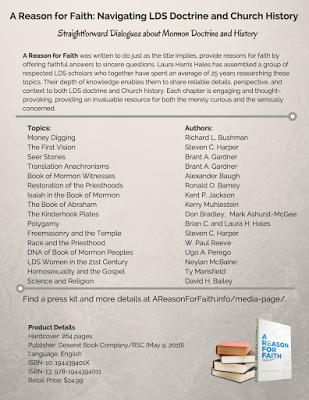 Bushman. Harper. Gardner. Muhlestein. Reeve. Perego. These are some of the leading scholars in the respective subjects that they cover. Each contributor has excellent academic training and important publications to their names. They have engaged thoughtfully and respectably with the primary sources and the secondary literature, offering nuanced and well-reasoned discussions that correct misunderstandings or falsehoods frequently perpetuated in the literature of the disaffected.

Consider for a moment the scope and complexity of the materials with which the student must cope if he would undertake a serious study of the Book of Abraham’s authenticity. At the very least he must be thoroughly familiar with (1) the texts of the “Joseph Smith Papyri” identified as belonging to the Book of the Dead, (2) the content and nature of mysterious “Sen-sen” fragment, (3) the so-called “Egyptian Alphabet and Grammar” attributed to Joseph Smith, (4) statements by and about Joseph Smith concerning the nature of the Book of Abraham and its origin, (5) the original document of Facsimile 1 with its accompanying hieroglyphic inscriptions, (6) the text of the Book of Abraham itself in its various editions, (7) the three facsimiles as reproduced in various editions of the Pearl of Great Price, (8) Joseph Smith’s explanation of the facsimiles, (9) the large and growing literature of ancient traditions and legends about Abraham in Hebrew, Aramaic, Arabic, Greek, Slavonic, etc., and (10) the studies and opinions of modern scholars on all aspects of the Book of Abraham.

Muhlestein largely meets Nibley’s recommendations by making his way carefully through the history of the Joseph Smith Papyri (pp. 80–81), the translation of the papyri (pp. 81–84), the Egyptian grammar documents (pp. 84–85), the evidence for the Book of Abraham as an ancient text (pp. 85–87), and finally the facsimiles (pp. 87–88). But even after all of this, Muhlestein emphasizes that further study is needed on many of these topics. “It would be unfortunate to make assumptions regarding the things we don’t know and then condemn Joseph Smith or the Book of Abraham based upon those assumptions,” Muhlestein concludes. “On the other hand, how interesting it is to explore the mystery of the translation of the Book of Abraham, which continues to reveal answers as it simultaneously elicits further questions” (p. 88).

Contrast the scholarly humility of Muhlestein (a professional Egyptologist who has studied the issues surrounding the Book of Abraham for some time now) with Runnells, who kamikazes through the intricacies of the Book of Abraham with little more than a squad of simplistic memes at his command. Where Muhlestein sees a plaque-obstructed carotid artery in need of a skillfully executed endarterectomy in order to save the patient, Runnells instead declares the very much alive patient dead on arrival and proceeds to hack away at the body with a meat cleaver.

Or consider how Richard Bushman tackles the question of Joseph Smith’s participation in “folk magic” (“Joseph Smith and Money Digging,” pp. 1–6). When it comes to the early life of Joseph Smith, there are few people who are better equipped to handle the topic than Bushman, who has written two excellent biographies of the Prophet. After an overview of the issue, including a helpful look at the historiography on Joseph Smith’s treasure seeking, Bushman concludes, “Magic and Christianity did not seem at odds with one another [in Joseph Smith’s environment]. The combination was altogether too common in the nineteenth century for it to invalidate Joseph Smith’s more conventional religious claims. In Mormonism and for many Christians, folk traditions and religion blend. To call the two incongruous seems more like a matter of religious taste than a necessary conclusion” (p. 4). This, of course, is followed by the necessary caveats.

At present, a question remains about how involved Joseph Smith was in folk magic. Was he enthusiastically pursuing treasure seeking as a business in the 1820s, or was he a somewhat reluctant participant, egged on by his father? Was his worldview fundamentally shaped by folk traditions? I think there is substantial evidence of his reluctance, and, in my opinion, the evidence for extensive involvement is tenuous. But this is a matter of degree. No one denies that magic was there, especially in the mid-1820s. Smith never repudiated folk traditions; he continued to use the seer stone until late in life and used it in the translation process. It certainly had an influence on his outlook, but it was peripheral—not central. Biblical Christianity was the overwhelming influence in the Book of Mormon and the Doctrine and Covenants. Folk magic was in the mix but was not the basic ingredient. (p. 4)

Contrast this carefully formulated and argued conclusion with Runnells, who liberally peppers his hopelessly reductionistic descriptions of Joseph Smith’s and other early Mormons’ participation in “folk magic” with pejoratives like “superstitious” and “magical.” Runnells may condescendingly sneer at these 19th century people if he wants to, but such reveals more about Runnells than it does about early Mormonism. If Runnells wants to be condescending, he’s free to be so. But if he chooses to be such, he must then abandon any pretense to offering worthwhile historical commentary, and it must be acknowledged that the CES Letter is universes apart from the kind of responsible historiography practiced by Bushman and other critical scholars.

Since 1981, when Stanley Kimball published his article on the Kinderhook plates, his evidence that the plates were forgeries has been uniformly accepted. Nearly all devout Latter-day Saints who have written about the plates have also accepted Kimball’s argument that Joseph Smith did not translate from them. Latter-day Saints have been inclined to accept Kimball’s argument that Joseph Smith did not translate the plates. They likely want to defend Joseph Smith as a true prophet, and they believe this means that he could not have translated anything from the fraudulent Kinderhook plates. Critics claim that since the plates were fake, Joseph Smith was a false prophet, and they have used this as evidence that he deceived others about having the gift of translation. What both these positions share in common is the assumption that Joseph Smith would have been acting as a prophet while translating from the Kinderhook plates. (p. 100)

This assumption is deconstructed by Bradley and Ashurst-McGee. They ask, “When Joseph Smith attempted to translate from the Kinderhook plates, was he acting as a prophet or was he acting as an amateur linguist?” (p. 104). Careful analysis leads them to conclude that “the relevant historical sources reveals Joseph Smith acting neither as an inspired prophet nor as a fraudulent imposter. Instead, it reveals an enthusiastic, yet amateur, linguist” (p. 110).

What exactly does Runnels have to say about this? Well, by now you should know where this is going. A search through the CES Letter reveals the Kinderhook plates mentioned exactly seven times, not counting the table of contents. Four of those instances sees Runnells simply glossing that the plates are “disturbing” (p. 35), Joseph was “duped” by them (p. 63) , he “failed the test” with them (p. 44), and that they “destroy” his “credibility” (p. 81). The one time where Runnells does offer some meager form of analysis, if it can be called that, it’s in the form of, you guessed it, a meme and an out-of-context quote by Bushman (p. 43). It’s as if Runnells is afflicted with a terrible Millennial version of the Midas touch, but instead of things turning into gold, whatever historical subject Runnells touches turns into wholly misleading and sometimes outright dishonest memes.

As I thought about how to frame my review of A Reason for Faith I was initially reluctant to mention Runnells or the CES Letter at all. After all, Runnells has received more than enough attention than he deserves. But as I kept reading A Reason for Faith I could not escape the obvious fact that in almost every respect the CES Letter acts as a handy foil when set next to it. To appropriate a metaphor used in Preach my Gospel, A Reason for Faith is a brilliant diamond when displayed on the black velvet that is the CES Letter. Or, if you prefer, when read side-by-side to an excellent work like A Reason for Faith, it is quickly apparent that the CES Letter is like the attempted Cecilia Giménez restoration of Ecce Homo: a botched attempt at art that would be hilarious were it not for the irreparable damage done to the source material.

So, with all of that in mind, I can heartily recommend A Reason for Faith as an excellent resource for students interested in Mormon history and scripture. I can especially recommend it alongside such works as Patrick Mason’s Planted as a great resource for those whose testimonies have been shaken or for those who are trying to help family and friends in a faith crisis. A Reason for Faith offers both familiar and new content that will prove useful to many readers.