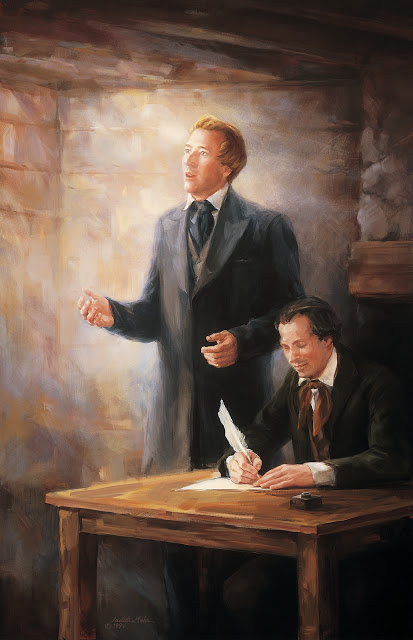 The first half of the eighth Article of Faith reads, “We believe the Bible to be the word of God as far as it is translated correctly.” This simple statement captures the theological position on the Bible accepted by Latter-day Saints. Unlike their Protestant friends, Latter-day Saints reject the doctrine of sola scriptura and instead follow a much more pragmatic (and defensible) approach that recognizes the often complex interplay between the divine inspiration, human fallibility, and practical reality that goes into composing scripture.

Thanks not only to angelic instruction (Joseph Smith–––History 36–41) and other revelation but also private study,[1] Joseph Smith recognized the fallibility of scripture, and particularly the Bible. “I believe the Bible as it read when it came from the pen of the original writers,” he once remarked. “Ignorant translators, careless transcribers, or designing and corrupt priests have committed many errors.”[2] Even more than a mere matter of losing what was once present, Joseph recognized an additional problem with the Bible as it came to be received in its canonical form: revelation or historical information that was not preserved for subsequent generations. In an 1834 epistle to the saints, the Prophet acknowledged the strong likelihood of revelation not having been properly recorded in the Bible.

From what we can draw from the scriptures relative to the teachings of heaven we are induced to think, that much instruction has been given to man since the beginning which we have not. . . . We have what we have, and the Bible contains what it does contain; but to say that God never said any thing more to man than is there recorded, would be saying at once, that we have at last received a revelation; for it must be one to advance thus far, because it is no where said in that volume by the mouth of God, that he would not, after giving what is there contained, speak again.[3]

These omissions and errors the Prophet attempted to restore or correct over a number of undertakings, most notably the translation of the Book of Mormon and what is now called the Joseph Smith Translation of the Bible (JST), or the “new translation” as it is called in revelation (Doctrine and Covenants 124:89). Latter-day Saint scholars have explored the various dimensions of Joseph’s project to rectify the problems he identified in the biblical corpus.[4] Suffice it to say for now that the matter is complex, as each facet of the Prophet’s overall project can be dissected and analyzed in a number of ways.

Take, for instance, the nature of the new translation. Although Joseph referred to his Bible revision project as a work of “translation,” the historical and manuscript evidence makes it very clear that it was not a translation in the customary sense of the word. For one thing, the work consisted of Joseph making revisions and corrections to the King James Bible, not producing fresh English renderings of the underlying Hebrew and Greek of the Old and New Testaments. Additionally, the Prophet revised some passages twice.[5] The revisions one encounters in the new translation thus include not just the restoration of lost content or the correction of corrupted passages, but also prophetic commentary and clarification, doctrinal harmonization, the modernization of the archaic language of the KJV, and other similar changes that engaged with the Bible on an interpretive level. Robert J. Matthews, a pioneering scholar on the JST, explains, “The translation was not a simple, mechanical recording of divine dictum, but rather a study-and-thought process accompanied and prompted by revelation from the Lord. That it was a revelatory process is evident from statements by the Prophet and others who were personally acquainted with the work.”[6]

Whatever the Prophet meant in using the word translation in this and other regards must therefore go beyond a mere conveying of one language into another. Certainly some translation projects, most notably the translation of the Book of Mormon, involved (in some revelatory manner) the actual rendering of an ancient language (Egyptian) into a modern one (English). But for Joseph, translation was an act of revelation, interpretation, and correct theological application. It was not just rendering one language to another, but restoring what was corrupted, correcting what might be misunderstood, harmonizing what might appear contradictory, exploring and probing what might be learned, expanding what was inadequate, and giving attention to what had been neglected or forgotten.

Take, for instance, Joseph’s commentary on the opening verses of Hebrews 6.

Of course, a contextual reading of the Greek underlying this passage will clarify that the author of Hebrews certainly did not intend to mean one should abandon the teachings of Jesus Christ. Instead he was urging his readers to move beyond their “dull understanding” and spiritual sluggishness despite “that [which] is hard to explain” (NRSV Hebrews 5:11). He wanted his readers to achieve the τέλος or perfection that Jesus himself had called for during his ministry (Matthew 5:48) by progressing beyond the “primary teachings” of Christ (Hebrews 6:1; ἀρχῆς τοῦ Χριστοῦ λόγον).

Joseph’s concern was therefore not one on a Greek to English level but an English to English level. In other words, he was concerned that a misunderstanding of the KJV’s somewhat misleading rendering of the Greek might lead someone theologically astray. In fact you cannot attain perfection by “leaving” (that is, abandoning or forsaking or apostatizing from) the first principles and ordinances of the gospel, Joseph clarifies, but you can attain it by building upon them and progressing further in revealed light and knowledge.

Thus Joseph “translated” Hebrews 6:1 in a way that would clarify the intention of the author to an English-speaking audience beyond pedantically rehashing the underlying Greek. In this regard what Joseph accomplished is remarkably similar to the work done by the German mystic and theologian Meister Eckhart, and echoes the concerns of Goethe’s studious Faust.[8] The Prophet’s undertaking is thus entirely legitimate when its intentions are clearly understood.

It is important to emphasize that a correct translation of the Bible does not just mean a correct conveying of the basic language of the text but also a proper understanding of the literary, historical, and cultural contexts behind the books of the Bible and their messages. After all, anyone who is literate enough can simply read a translation of the Bible, but to truly understand the Bible and its teachings requires an engagement with the text on a much deeper level. Understanding how the ancient Israelites wrote (i.e. what narrative, poetic, and historiographical conventions of genre were utilized in writing the books of the Bible) is just as important as understanding what they wrote.

Naturally, all of this applies to other Latter-day Saint books of scripture as well. Understanding the different conventions that went into the composition of the narratives and sermons of the Book of Mormon versus the sections of the Doctrine and Covenants is just as vital as merely being able to read the English text.

So the next time one reads in the eighth Article of Faith that the Bible is the word of God “as far as it is translated correctly,” think of something more than just how it was communicated into a modern language. Think about how it was composed and transmitted (and all the challenges that attend such) and how it should be properly exegeted. Think about how the truths restored through modern revelation may amplify, clarify, or even problematize what is being read. And above all, focus on how a robust and informed understanding of the text may act as a springboard for personal revelation.

[8]: See Tod R. Harris, “‘Taking a Different View of the Translation’: The Illumination of Alternative Meanings in the Translation of Bible Passages by Joseph Smith and Meister Eckhart,” BYU Studies Quarterly 54, no. 2 (2015): 63–88.

2 thoughts on “As Far As It Is Translated Correctly: Translation, Interpretation, and Revelation”