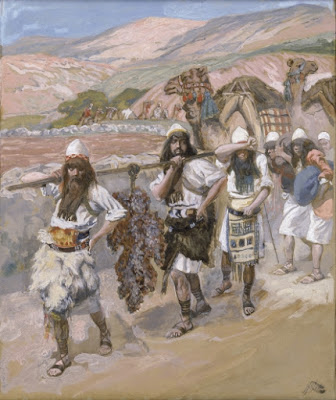 One thing I have become attuned to looking for in scriptural narratives is irony. Due to the fact that I wrote a capstone paper on the use of irony in the work of fin-de-siècle Austrian author Arthur Schnitzler, my reading of the scriptures often looks to uncover instances where ironic outcomes or situations highlight a larger moral or theme in the text.

The very basic meaning of irony that I have in mind here is the unexpected outcome or unfolding of a narrative or happenstance, or the ironic use of language to communicate something either unexpected or with a hidden double entendre. Robert A. Rees has already read the Book of Mormon looking for instances of irony to great effect. My personal favourite example of irony in the Book of Mormon, as also noticed by Rees, is the divine silencing of the blaspheming Korihor (Alma 30:49–50).

The Hebrew Bible is also rife with irony and other forms of paronomasia on both narrative and linguistic levels. One example I hadn’t noticed before that struck me recently is in the wilderness narratives in Numbers and Deuteronomy.

At the end of forty days they returned from spying out the land. And they came to Moses and Aaron and to all the congregation of the Israelites in the wilderness of Paran, at Kadesh; they brought back word to them and to all the congregation, and showed them the fruit of the land. And they told him, “We came to the land to which you sent us; it flows with milk and honey, and this is its fruit. Yet the people who live in the land are strong, and the towns are fortified and very large; and besides, we saw the descendants of Anak there. The Amalekites live in the land of the Negeb; the Hittites, the Jebusites, and the Amorites live in the hill country; and the Canaanites live by the sea, and along the Jordan.” (Numbers 13:25–29)

Undeterred, some faithful Israelites, such as Caleb, tried to reassure the spies, who nevertheless insisted: “We are not able to go up against this people, for they are stronger than we. . . . The land that we have gone through as spies is a land that devours its inhabitants; and all the people that we saw in it are of great size. There we saw the Nephilim (the Anakites come from the Nephilim); and to ourselves we seemed like grasshoppers, and so we seemed to them” (Numbers 13:31–33).

This “evil report” (dibbah) of the spies, as the Bible calls it, instilled great fear in the hearts of the Israelites.

Then all the congregation raised a loud cry, and the people wept that night. And all the Israelites complained against Moses and Aaron; the whole congregation said to them, “Would that we had died in the land of Egypt! Or would that we had died in this wilderness! Why is the Lord bringing us into this land to fall by the sword? Our wives and our little ones will become booty; would it not be better for us to go back to Egypt?” So they said to one another, “Let us choose a captain, and go back to Egypt.” (Numbers 14:1–4)

As a result of this infidelity, God swore that the current generation of Israelites would not inherit the land of promise. “None of the people who have seen my glory and the signs that I did in Egypt and in the wilderness, and yet have tested me these ten times and have not obeyed my voice, shall see the land that I swore to give to their ancestors; none of those who despised me shall see it,” the Lord promises (Numbers 14:22–23). Even Moses would only be able to look upon the land of Canaan from Mt. Nebo shortly before his death (Deuteronomy 34:1–8). He was, in effect, just a step away from entering the land of promise, but not even he would escape this ironic fate.

Here’s where the irony comes into play. The text continues:

“As I live,” says the Lord, “I will do to you the very things I heard you say: your dead bodies shall fall in this very wilderness; and of all your number, included in the census, from twenty years old and upward, who have complained against me, not one of you shall come into the land in which I swore to settle you, except Caleb son of Jephunneh and Joshua son of Nun. But your little ones, who you said would become booty, I will bring in, and they shall know the land that you have despised. But as for you, your dead bodies shall fall in this wilderness. And your children shall be shepherds in the wilderness for forty years, and shall suffer for your faithlessness, until the last of your dead bodies lies in the wilderness. According to the number of the days in which you spied out the land, forty days, for every day a year, you shall bear your iniquity, forty years, and you shall know my displeasure.” I the Lord have spoken; surely I will do thus to all this wicked congregation gathered together against me: in this wilderness they shall come to a full end, and there they shall die. (Numbers 14:28–35)

Not only will the current generation of Israel not possess the land of promise, as was expected, but it will wander in the wilderness for forty years and suffer all of the horrific outcomes the people expected to happen to them if they went up against Canaan. They will get what they asked for, but, ironically, not at all in the manner they expected.

(So be careful what you wish for.)

Not only that, but this fear and doubt on the part of the Israelites comes right after they witnessed firsthand their miraculous deliverance from Egypt. They had just seen the Lord deliver them from their enemies with great signs and wonders, proving that he was indeed God and the agent of Israel’s salvation. One would expect Israel to have greater faith in the Lord given what they had just experienced, but instead they succumb to fear and become incredulous at God’s power and unfaithful to his covenant.

But the irony doesn’t stop there. When the time finally comes for Israel to conquer Canaan, the biblical narrative explains that the Canaanites were practically shaking in their boots at the sight of the Israelite army (Joshua 5:1). As Rahab informed the Israelite vanguard, “As soon as we heard [of the divine power guiding the Israelite army], our hearts melted, and there was no courage left in any of us because of you. The Lord your God is indeed God in heaven above and on earth below” (Joshua 2:11).

In other words, the fears of the Israelites were unfounded, which they only discover when they hear it, ironically, from a Canaanite prostitute after the previous generation was dead. In other words, the Israelites had a hard time believing the words of God Almighty who had delivered them from Egypt, but on the word of a lowly prostitute they’re encouraged enough to invade the land.

But how might this all apply to latter-day Israel?

For now we are here wandering in the lone and dreary world (or wilderness). We have yet to inherit Zion and reap the blessings promised to Abraham, Isaac, and Jacob. We are, in effect, wandering forty years in the wilderness. Yes, we have prophetic leaders and temples (or tabernacles, if you will) and enjoy God’s daily providence, all as ancient Israel did. But the fact is we’re still in the wilderness.

And like ancient Israel in the wilderness we sometimes see our enemies in their walled cities and with giants in their ranks and become fearful, ultimately succumbing to our doubts.

This can be seen in two ways. The first is on a personal and individual level in how we each react to the sins and temptations that beset us. We forget our divine heritage as children of heavenly parents and succumb to the fears and doubts that because our enemies (our sins) are stronger than us, so we think, we’re lost to perdition.

The second way, however, is in how we as a community, as a people, and even as a church, succumb to the ungodly cultural and political forces that fight against our Zion ideals.

I’ll be blunt when I say I think the historical priesthood ban is one major example of this. Latter-day Saint theology fundamentally rejects racism. “He denieth none that come unto him,” Nephi taught concerning access to making covenants with the Lord. “Black and white, bond and free, male and female . . . all are alike unto God” (2 Nephi 26:33). With the racial and class egalitarianism taught in the Book of Mormon and early revelations, the earliest generation of Latter-day Saints were poised to break free of the racial attitudes of their culture and embrace the Zion ideal portrayed in the scriptures.

Instead what happened was Latter-day Saints essentially capitulated to and participated in the highly antipathetic racial attitudes of their contemporary cultural towards persons of African descent. And so we got the unscriptural and uninspired priesthood ban that denied a portion of God’s children access to covenants because of their race.

In short, we saw the walled city of American racism and surrendered to our enemies. We were within arm’s length of possessing the land of promise, and even had clusters of grapes that indicated the bounties of the land (think of the ordination of Elijah Able and Walker Lewis to the priesthood and the faith and courage of Jane Manning James) but couldn’t grasp it. As with Moses, even our latter-day prophets fell short of possessing the land of promise, which should always serve as a sobering reminder of how even the greatest of us sometimes fail to live up to our divinely mandated expectations.

And so we wandered in the wilderness for another generation until a new era of prophetic leadership guided us to victory over this foe. But remember, as with Israel and the Canaanites when the former came into possession of land of promise, our own (racial) troubles did not end after 1978.

I can imagine of other examples where we as a people fell short of our great potential, but this is one example that should sufficiently illustrate my main point. And while this likening or application of the scriptures may not be entirely perfect in all the details, I think the broad picture is compelling enough. Our goal as latter-day Israel while we travel in the wilderness is to face the walled cities of the modern Canaanites (both within and outside of the church) and to face the giants in the ranks of our (spiritual, temporal, and cultural) enemies with courage and determination.

1 thought on “(Latter-day) Israel in the Wilderness”