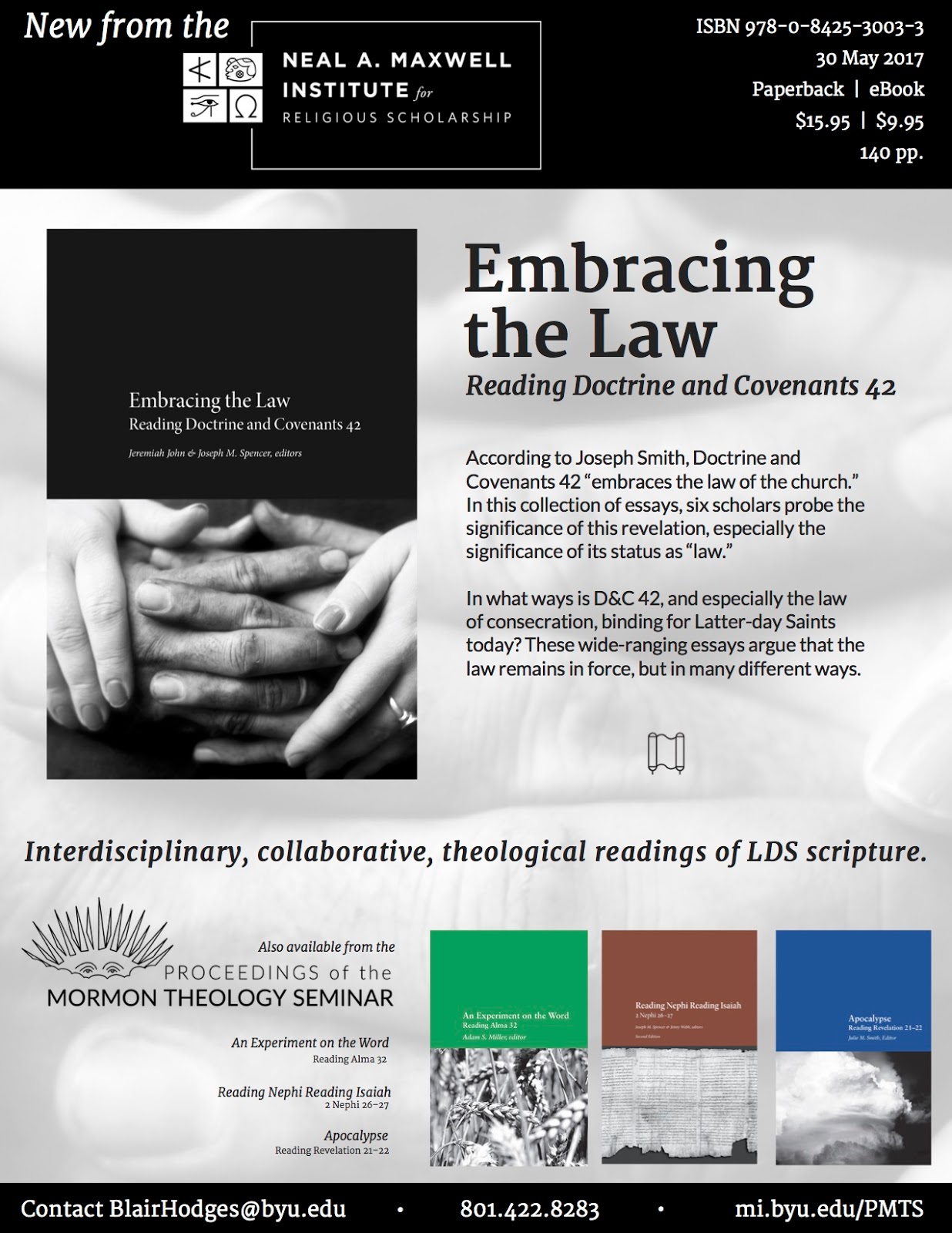 Section 42 of the Doctrine and Covenants is arguably one of the more seminal sections of this book of restoration scripture, alongside other important sections including 20 (the Articles and Covenants of the Church), 76 (the Vision), 110 (Kirtland Temple theophanies), 119 (revelation on tithing), 121 (Joseph Smith’s Liberty Jail pleadings), and 132 (the revelation on marriage).

The importance of section 42 is such that it was designated straightforwardly as “the law” of God to the Saints (D&C 42:2). This law touched on spiritual, ethical, and temporal matters, most notably on what would come to be called the Law of Consecration.

There has been much confusion and misunderstanding by members of The Church of Jesus Christ of Latter-day Saints about section 42 generally and the Law of Consecration particularly. For this reason it is most welcome to see this new volume addressing D&C 42 by the Neal A. Maxwell Institute for Religious Scholarship. Embracing the Law: Reading Doctrine and Covenants 42, edited by Jeremiah John and Joseph M. Spencer, enlists a handful of high-calibre scholars to explore this section and dissect both its textual development and theological importance.

After an introduction and summary report by the editors, the volume presents contributions from the following:

Nathan Oman (“‘I Will Give unto You My Law’: Section 42 as a Legal Text and the Paradoxes of Divine Law”) explores D&C 42 as a legal text in both theological and historical contexts. What is the interplay between the divine law canonized in the Doctrine and Covenants with the divine laws of precursive biblical traditions, and even secular law? Oman explores this question and offers many insights from this angle.

Jeremiah John (“‘That My Covenant People May Be Gathered in One’: The Law of Section 42 of the Doctrine and Covenants”) builds on Oman’s treatment by analyzing “the meaning of law in section 42″ and how that definition relates to the concept of “law” in other scripture (p. 21, emphasis in original). John feels D&C 42 is not presenting “a new set of commands” but is instead “revealing the commandments in the context of the plan of salvation and the promises that God makes to the church” (p. 34).

Karen E. Spencer (“Teaching in Zion”) provides a helpful look at the didactic elements of D&C 42, including the prominent instructions given in the revelation for how “the elders, priests and teachers of this church shall teach the principles of my gospel” (v. 12). Spencer’s elaboration on these points I found especially helpful for practical classroom or private use. She concludes with this important reminder. “In Zion, teaching cannot be done for praise. Noth­ing can be done for the praise of the world. No matter what the members of the church are consecrating, yielding to the directions of the Spirit instead of to the praise of the world is the basis of consecration” (p. 54).

Russell Arben Fox (“‘Thou Wilt Remember the Poor’: Social Justice and a Radical Reading of ‘The Law of the Church of Christ’ [Doctrine and Covenants 42]”) offers what will probably prove to be the most provocative piece in the volume. He makes the case for the compatibility, broadly speaking, of the principles in D&C 42 with modern social justice ideology and liberation theology. “It is my claim,” Fox writes, “that Joseph Smith’s revelation of the laws of consecration and stewardship, as first articu­lated through the oft-­revised and rearranged text ‘The Laws of the Church of Christ,’ may be understood as providing normative support for” social justice principles, including “solidarity and equality, personalism and distributism, and the preferential option for the poor” (p. 56). Fox is carful not to equate the teachings in D&C 42 with modern liberation theology, but he nevertheless sees many overlaps that should be acknowledged by readers.

Robert Couch (“Consecration, Holy War, and the Poor: An Apocalyptic Approach to Doctrine and Covenants 42”) examines D&C 42 as an apocalyptic text. By this Couch does not mean a text concerning the end of the world, but rather one that attempts to help “the reading community orient itself to God’s kingdom rather than to the world” (p. 80). I confess it was somewhat difficult for me to follow Couch’s argument, since he touches on a number of nuanced matters, but if I understood him correctly, he appears to emphasize the “redemptive possibilities” that can be achieved if the Saints enact the divine principles of D&C 42 in a profane setting (p. 108).

Joseph M. Spencer (“Remnants of Revelation: On the Canonical Reading of Doctrine and Covenants 42”) finishes off the volume with an intricate analysis of the textual history of D&C 42 and an explanation of how such an analysis might affect a canonical reading of the text. Said another way, a look at the textual/manuscript history of D&C 42 (what textual emendations and edits were made to the text and when) in addition to a look at how its inclusion in the canon (and, thereby, the shaping of the canon itself over time) might influence our reading of both this section and the modern edition of the Doctrine and Covenants more generally.

Overall, I found Embracing the Law to contain useful and fascinating readings of Doctrine and Covenants 42. Both the Latter-day Saint faithful reading the book to gain a better understanding of their scriptures and non-Mormon scholars wanting to understanding the historical and theological legacy of Joseph Smith as a prominent nineteenth century religious figure would do well to consult this volume.