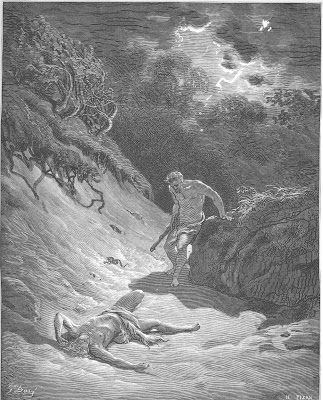 The Gadianton Robbers are infamous among readers of the Book of Mormon. The phrase “secret combination(s),” now synonymous among Latter-day Saints for conspiracy, was used by Mormon to describe them (Helaman 2:8; 3:23; 6:38). They are introduced in the book of Helaman during “the fortieth year of the reign of the judges over the people of Nephi,” or ca. 50 BC (Helaman 1:1). Their first leader, Kishkumen, assassinated the chief judge Pahoran II after Paanchi, a political rival, was condemned to death for insurrection that essentially amounted to treason (vv. 5–10). At first the Gadianton Robbers are simply designated a sort of paramilitary “band” who opposed the Nephite judgeship (v. 12), perhaps akin to Hitler’s Sturmabteilung (the SA or the Brownshirts). Very quickly, however, they took on a much more insidious character.

Helaman 2 is where the “band of Kishkumen” (Helaman 1:12; 2:4) is first called a “band of robbers and secret murderers” (Helaman 2:10) who were now under the control of one Gadianton, “who was exceedingly expert in many words, and also in his craft, to carry on the secret work of murder and of robbery” (Helaman 2:4). As Welch and Peterson have persuasively argued, these “robbers” weren’t petty criminals and thieves, but rather insurrectionists, highwaymen, brigands, and guerrilla warriors. They were a serious threat to the Nephite polity, and Mormon takes time to make sure his readers don’t have any wrong impressions about them. “Ye shall see that this Gadianton did prove the overthrow, yea, almost the entire destruction of the people of Nephi,” Mormon forewarns his readers (Helaman 2:13).

But what made the Gadianton Robbers so dangerous? After all, political insurrection and civil war was nothing new to the Nephites. Almost as soon as the judgeship was established by Mosiah II (Mosiah 29), Alma II, the first chief judge, withstood the Anti-Christ Nehor and clashed swords with the latter’s disciple, the dissenter and would-be king Amlici (Alma 1–3). It seems the key difference between Gadiantonism and earlier manifestations of Nephite apostasy is found in Mormon’s description of the underlying origin of Gadianton ideology.

Now behold, those secret oaths and covenants did not come forth unto Gadianton from the records which were delivered unto Helaman; but behold, they were put into the heart of Gadianton by that same being who did entice our first parents to partake of the forbidden fruit—Yea, that same being who did plot with Cain, that if he would murder his brother Abel it should not be known unto the world. And he did plot with Cain and his followers from that time forth. And also it is that same being who put it into the hearts of the people to build a tower sufficiently high that they might get to heaven. And it was that same being who led on the people who came from that tower into this land; who spread the works of darkness and abominations over all the face of the land, until he dragged the people down to an entire destruction, and to an everlasting hell. Yea, it is that same being who put it into the heart of Gadianton to still carry on the work of darkness, and of secret murder; and he has brought it forth from the beginning of man even down to this time. And behold, it is he who is the author of all sin. And behold, he doth carry on his works of darkness and secret murder, and doth hand down their plots, and their oaths, and their covenants, and their plans of awful wickedness, from generation to generation according as he can get hold upon the hearts of the children of men. And now behold, he had got great hold upon the hearts of the Nephites; yea, insomuch that they had become exceedingly wicked; yea, the more part of them had turned out of the way of righteousness, and did trample under their feet the commandments of God, and did turn unto their own ways, and did build up unto themselves idols of their gold and their silver. (Helaman 6:26–31)

From this passage we learn the following concerning Gadiantonism:

Based on this passage, and with the help of the informative details revealed by the Prophet Joseph Smith in the Book of Moses, I propose that the underlying ideology and praxis of Gadiantonism was the same counterfeit temple priesthood Lucifer attempted to establish unsuccessfully with Adam and Eve and successfully with their child Cain.

The Latter-day Saint temple endowment drama narrates the Creation, the Fall of Adam and Eve, and the eventual redemption and exaltation of the human family by obedience to the principles and ordinances of the gospel of Jesus Christ. Part of the drama depicts Adam and Eve as being instructed relative to gospel covenants by angelic messengers. What’s more, the endowment portrays Adam and Eve as being aware of temple ordinances, and as effectively being commissioned as humanity’s first temple workers. This is plainly depicted in Moses 5 in the Pearl of Great Price, where Adam and Eve are taught the laws of the gospel and perform sacrifices on an altar (Moses 5:1–12, 58–59). As soon as angels taught Adam and Eve, the text describes how Satan appeared thereafter and attempted to deceive them and their posterity (v. 13). Sadly, many of Adam and Eve’s children, including Cain, fell for the deception, and “began from that time forth to be carnal, sensual, and devilish” (v. 13).

Concerning Cain, the Book of Moses explains that his jealousy and envy for his brother Abel drove him to madness. “Cain was very wroth, and his countenance fell,” which left him vulnerable to Satanic manipulation (v. 21). Thereafter the two entered a covenant, which is described in the text thusly:

And Satan said unto Cain: Swear unto me by thy throat, and if thou tell it thou shalt die; and swear thy brethren by their heads, and by the living God, that they tell it not; for if they tell it, they shall surely die; and this that thy father may not know it; and this day I will deliver thy brother Abel into thine hands. And Satan sware unto Cain that he would do according to his commands. And all these things were done in secret. And Cain said: Truly I am Mahan, the master of this great secret, that I may murder and get gain. Wherefore Cain was called Master Mahan, and he gloried in his wickedness. (vv. 29–31)

In what was a perverse inversion of the biblical covenant-ritual action of shedding an animal’s blood in making (literally “cutting”) a covenant with God (cf. Genesis 15:1–15), Cain, complete with a ritual gesture (“swear unto me by thy throat”), ratified his own covenant with Satan by the grisly token of his brother’s blood (v. 32). In a sort of twisted irony, Abel, who had offered the firstlings of his flock as a sacrifice to God, became the sacrificial slaughter in Cain’s sacrifice to Satan (vv. 20–21). To punctuate the depths of his utter depravity, the text describes Cain’s immediate reaction to his fratricidal bloodlust as being that of sated greed. “Surely the flocks of my brother falleth into my hands,” the murderer exulted (v. 33).
Others, such as Bradshaw and Parry, have drawn attention to the many temple themes running throughout the Adam and Eve pericope as it appears in both Moses and Genesis. For Latter-day Saints who have received their endowment, the connections this pericope has with the temple are obvious. What is significant here for my purposes are the thematic connections between the Book of Moses and the description of the Gadianton Robbers provided in the book of Helaman.
Notice how each of these are clear inversions (and perversions) of the covenants and themes of the temple.
(Incidently, the clothing later worn by the Gadianton Robbers appears to have been fashioned in part to make a mockery of temple ordinances.)
To summarize, Mormon found the Gadianton Robbers such a grave threat to the Nephites precisely because he saw them as reviving an ancient counterfeit temple priesthood. They were more than political insurrectionists. To Mormon, they were no less than false priests of Satan who were fundamentally perverting the Nephite sense of holiness. Evidently the Book of Moses was available to Mormon in some capacity, most likely having been preserved in the brass plates (cf. 1 Nephi 5:11; 19:23), and he was aware of its contents well enough to see the clear parallels between Cain’s murderous actions and the treachery of the Gadianton Robbers.

2 thoughts on “Gadiantonism as a Counterfeit Temple Priesthood”