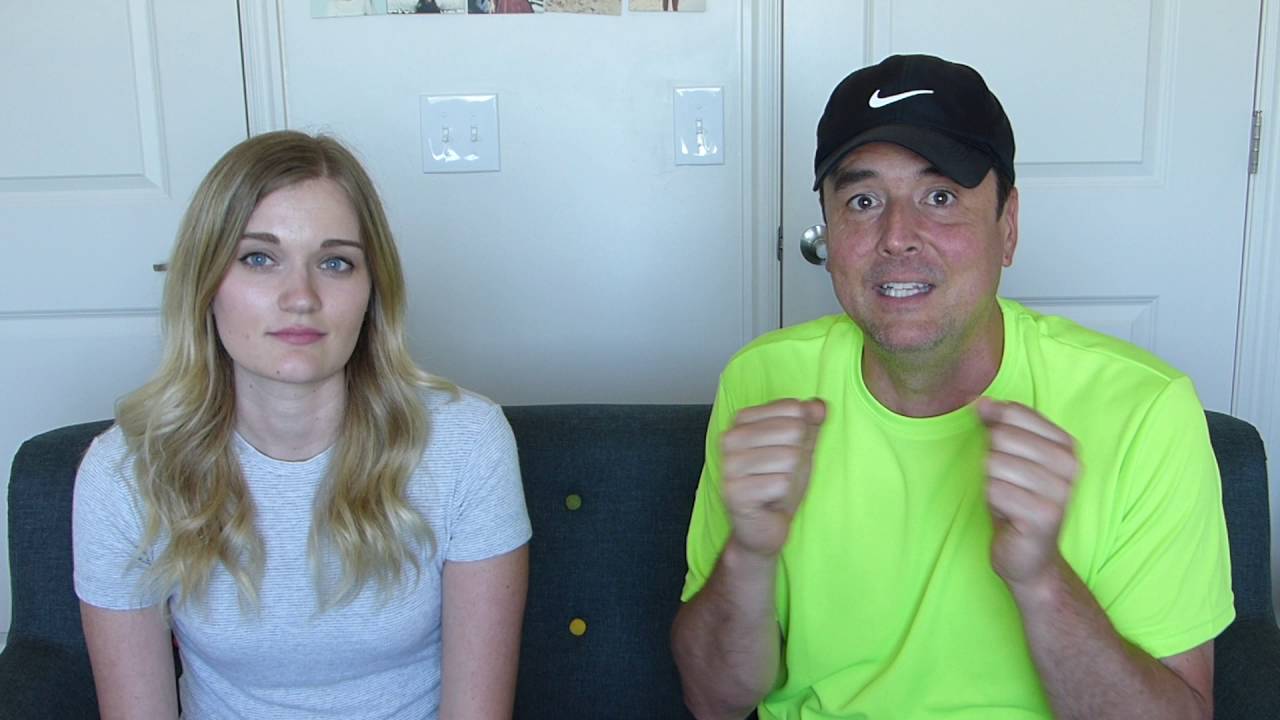 Samantha Shelley and Tanner Gilliland, the proprietors of the blog Zelph on the Shelf and the Team Rocket of ex-Mormonism, recently posted an article on Medium where they describe the “10 Signs You’re Probably In A Cult.”

I read this post with considerable amusement, as I couldn’t help but notice that many, if not all, of the 10 signs spoken of by these online oracles easily apply to the podcasting enterprise of their BFF John Dehlin. I’m sure this was unintentional. After all, Shelley and Gilliland are more self-serving than a McDonald’s food kiosk giving itself a car wash, and undoubtedly they just (clumsily) tailored their post to describe their former faith.

Nevertheless, the parallels are there. So consider, if you please, how Zelph on the Shelf just accidentally proved that Mormon Stories is a cult.

1. The leader is the ultimate authority

Shelley and Gilliland observe that “if you’re not allowed to criticize your leader, even if the criticism is true, you’re probably in a cult.” Indubitable. And who better does this describe than John Dehlin, the man who remorselessly blocks people on social media for raising even the faintest voice of criticism, and who surreptitiously pulled strings to have a paper criticizing him suppressed before it could be published?

Closely related to the first point is this second one raised by Shelley and Gilliland: “Cults view critical thinking as an infectious disease and every effort is made to suppress it. Doubting members are encouraged to isolate themselves from outside influences and focus solely on the doctrine of the cult.” Any organization that did this would no doubt be classified as a cult. Like, if somebody, let’s say a certain Mormon blogger with a pretentiously sounding Hebrew-named blog, was unilaterally forbidden by John Dehlin from having his content shared on the Mormon Stories Facebook page, such would clearly count as suppression of critical thinking that was threatening to Mormon Stories cult dogma. Right? 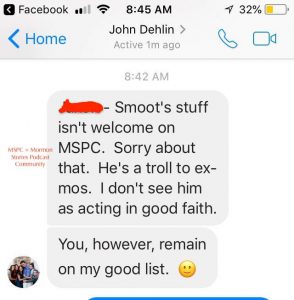 These shrewd cultologists inform us that “because the cult considers itself the ultimate authority on truth, it can’t imagine anybody leaving it with their integrity intact. Thus, it has to perpetuate a false narrative that former members were deceived, proud, immoral, or lazy.” Perhaps they mean the false narrative perpetuated by John Dehlin that those who don’t join his cult, those who stay faithful in the LDS Church or don’t subscribe to Dehlin’s particular brand of ex-Mormonism, are in it for the money, don’t want to surrender their social clout, are emotionally stunted, suffer from debilitating cognitive biases, or are otherwise incapable of just being as smart or woke as he and his followers are. As Shelley and Gilliland wisely point out, all of these traits seen in John Dehlin and his followers are, in fact, telltale signs of a cult.

4. The group is paranoid about the outside world

“Cults position themselves as the sole refuge from an evil outside world that is intent on their destruction,” Shelley and Gilliland write. “Cults thrive on conspiracy theories, catastrophic thinking, and persecution complexes.” Surely they don’t mean the many conspiracies which have been peddled by John Dehlin, such as conspiracies about President Monson having dementia, or about a supposed power vacuum in the Quorum of the Twelve allowing Elder M. Russell Ballard to sic his lackey Elder L. Whitney Clayton specifically on Dehlin. And when it comes to persecution complexes, let it not be readily forgotten that the irritable Dehlin sees any critique by any “apologist” as nothing less than a direct ad hominem attack on him. The LDS Church and its mercenary goons, in Dehlin’s cultish worldview (per Shelley and Gilliland), are always out to get him.

5. The group relies on shame cycles

In order to deceive their victims, “cult leaders trap members in shame cycles by imposing abnormally strict codes of conduct (usually prescriptions about diet, appearance, sex, relationships, media), guilting members for their shortcomings, and then positioning themselves as the unique remedy to the feelings of guilt which they themselves created.” At first glance it is difficult to discern how precisely this might apply to Dehlin, if only because the abysmal moral nihilism promoted by Dehlin doesn’t seem to allow any sense of shame (the primal evil which must be combated at all costs) from ever being countenanced in life decisions.

But the more I think about it, the more I can image how switching out just a few key words might make this applicable to Dehlin. “Cult leaders trap members in shame cycles by imposing abnormally strict ideological beliefs (usually prescriptions about believing the Book of Mormon is authentic, that Mormon leaders have inspiration, that Mormon apologists are thoughtful and intelligent, or that Mormon moral standards are in any way healthy), guilting members for their ideological shortcomings, and then positioning themselves as the unique remedy (through some helpful therapy sessions offered at a reasonable rate) to the feelings of resentment which they themselves created.” I don’t know, though. I might be stretching here. I can’t imagine John “let me help you through your faith transition with some mental health counseling” Dehlin ever attempting to position himself as the “meditiator [sic] of worthiness and the foundation of the member’s self esteem.”

6. The leader is above the law

Of course, what good is a cult without it involving sex? “A prevalent idea among cult leaders is that they are above the law,” our duo explains, “be it human or divine. This idea allows them to exploit their followers economically and sexually without repercussions.” It gets even worse, however, since “when confronted, [cult leaders] do not confess, but create justifications for their impropriety.” But surely none of this is relevant to the accusations of sexual harassment and misogyny from women such as Kate Kelly and Kristy Money and the anonymous “Rosebud” which have accompanied John Dehlin; accusations which Dehlin has denied or created justifications for. Perish the thought!

As with lots of sex, no cult is complete without brainwashing, which Shelley and Gilliland helpfully define as “the process through which a cult slowly breaks down a person’s sense of identity and ability to think rationally.” How do cults accomplish this? Well, there is “the use of thought-terminating cliches,” which our experts single out as “the hallmark of indoctrination.” Cliches, I presume, such as “Joseph Smith was a pedophile,” or “there’s no archaeological evidence for the Book of Mormon,” or “apologists engage in mental gymnastics,” or “Mormons gaslight people who disagree with them,” or “Dan Peterson is a vicious bully,” or “LD$, INC. is all about money,” or “Church leaders are lying to you about Mormon history,” and the like. Damning indeed is this cogent point against Guru Dehlin, who leads his followers in reciting these hypnotic mantras like some kind of secular Shema or apostate Articles of Faith.

8. The group is elitist

Equipped as they are with The Truth™️, cults “see themselves as the enlightened, chosen, and elect organization tasked with radically transforming individual lives and the entire world.” This very plausibly explains how, unlike “TBMs” or “apologists” who are mentally and emotionally handicapped with things like “blind faith” and “cognitive dissonance,” Dehlin sees himself and his supporters as the standard-bearers of reason and goodness and wokeness. Unshackled from their problematic Mormon faith, they are free to stand up to the evil LDS Church as enlightened moral paragons and save the women, people of color, LGBTs, doubters, and other victims who suffer under Mormon tyranny. Furthermore, a cultish sense of moral and ideological “elitism creates greater sense of group unity and responsibility centered on a united purpose.” This might include, say, the united purpose of alerting as many family and friends as possible to the dangers of the LDS Church, its avaricious leaders, and its deceitful apologists.

9. There is no financial transparency

It was Creed Bratton who mused that “you have more fun as a follower [of a cult], but you make more money as a leader.” But one should be ever watchful, since “a group that refuses to disclose its finances” or engages in any other financial shenanigans “is a huge red flag.” To put it succinctly, “Ethical organizations have nothing to hide.” That they don’t, which makes me wonder about Dehlin’s questionable financial practices others have drawn attention to.

Shelley and Gilliland round off their list by commenting how “cults use secret rituals as rites of passage that solidify a member’s loyalty to the group. Initiation into these rites usually only comes after a member has undergone certain tests or made adequate financial contributions.” But they fail to specify whether these rituals and rites are the ones enacted in secretive Mormon temples or (paid) Mormon Stories exclusive cruises and (paid) Mormon Stories VIP retreats.

And so we’re left with two possibilities. The first is that Shelley and Gilliland are secret Mormon apologists who are playing the long game in an attempt to infiltrate Mormon Stories and expose it from the inside. The other is that these ten points of theirs are so vague and equivocal that they can describe everything from the religion they are now hostile towards to their own ally and his organization; thereby making their points effectively meaningless, and rendering their definition of the word “cult” as little more than a lazy pejorative.