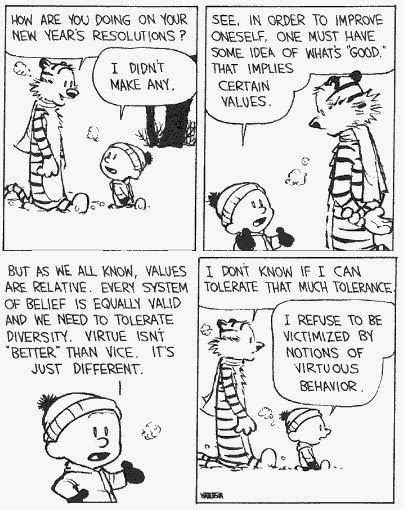 Today in sacrament meeting one of the speakers gave a talk on the subject of “truth and tolerance.” After quoting parts of Elder Dallin H. Oaks’ sermon on the same subject, the speaker, following Elder Oaks’ cue, condemned moral relativism and stressed the importance of obeying God’s commandments.

During the speaker’s talk I was reminded of the purported[1] 1842 letter from Joseph Smith to Nancy Rigdon. In this letter, Joseph laid out his apologia for the morality of plural marriage (which he had evidently proposed to Nancy to enter into as one of his wives).

Happiness is the object and design of our existence; and will be the end thereof, if we pursue the path that leads to it; and this path is virtue, uprightness, faithfulness, holiness, and keeping all the commandments of God. But we cannot keep all the commandments without first knowing them, and we cannot expect to know all, or more than we now know unless we comply with or keep those we have already received. That which is wrong under one circumstance, may be, and often is, right under another.

God said, “Thou shalt not kill;” at another time He said, “Thou shalt utterly destroy.” This is the principle on which the government of heaven is conducted—by revelation adapted to the circumstances in which the children of the kingdom are placed. Whatever God requires is right, no matter what it is, although we may not see the reason thereof till long after the events transpire. If we seek first the kingdom of God, all good things will be added. So with Solomon: first he asked wisdom, and God gave it him, and with it every desire of his heart, even things which might be considered abominable to all who understand the order of heaven only in part, but which in reality were right because God gave and sanctioned by special revelation.

A parent may whip a child, and justly, too, because he stole an apple; whereas if the child had asked for the apple, and the parent had given it, the child would have eaten it with a better appetite; there would have been no stripes; all the pleasure of the apple would have been secured, all the misery of stealing lost.

This principle will justly apply to all of God’s dealings with His children. Everything that God gives us is lawful and right; and it is proper that we should enjoy His gifts and blessings whenever and wherever He is disposed to bestow; but if we should seize upon those same blessings and enjoyments without law, without revelation, without commandment, those blessings and enjoyments would prove cursings and vexations in the end, and we should have to lie down in sorrow and wailings of everlasting regret. But in obedience there is joy and peace unspotted, unalloyed; and as God has designed our happiness—and the happiness of all His creatures, he never has—He never will institute an ordinance or give a commandment to His people that is not calculated in its nature to promote that happiness which He has designed, and which will not end in the greatest amount of good and glory to those who become the recipients of his law and ordinances. Blessings offered, but rejected, are no longer blessings, but become like the talent hid in the earth by the wicked and slothful servant; the proffered good returns to the giver; the blessing is bestowed on those who will receive and occupy; for unto him that hath shall be given, and he shall have abundantly, but unto him that hath not or will not receive, shall be taken away that which he hath, or might have had.

Be wise today; ’tis madness to defer:
Next day the fatal precedent may plead.
Thus on till wisdom is pushed out of time
Into eternity.

Our heavenly Father is more liberal in His views, and boundless in His mercies and blessings, than we are ready to believe or receive; and, at the same time, is more terrible to the workers of iniquity, more awful in the executions of His punishments, and more ready to detect every false way, than we are apt to suppose Him to be. He will be inquired of by His children. He says: “Ask and ye shall receive, seek and ye shall find;” but, if you will take that which is not your own, or which I have not given you, you shall be rewarded according to your deeds; but no good thing will I withhold from them who walk uprightly before me, and do my will in all things—who will listen to my voice and to the voice of my servant whom I have sent; for I delight in those who seek diligently to know my precepts, and abide by the law of my kingdom; for all things shall be made known unto them in mine own due time, and in the end they shall have joy.

So, I wonder if we could classify Joseph Smith as a moral relativist. “That which is wrong under one circumstance, may be, and often is, right under another.” That sounds pretty relativistic to me.

Of course, even if we could classify Joseph Smith as a moral relativist (assuming, again, that the letter is authentic), I don’t think he’d fall under the same category as current moral relativists who preach the popular laissez faire morality of today. “There is a law, irrevocably decreed in heaven before the foundations of this world, upon which all blessings are predicated,” Joseph taught in 1843. “And when we obtain any blessing from God, it is by obedience to that law upon which it is predicated” (D&C 130:20–21). That doesn’t strike me as something that would go over well with modern moral relativists.

In any event, I’m just thinking out loud here, and am only asking some questions. I don’t know if Joseph Smith really was a moral relativist, but it’s something to think about. What I will do is urge caution before we Latter-day Saint unilaterally condemn any kind of moral relativism, as the question of morality is a complex issue that deserves nuanced approaches.

[1]: I say “purported” because the original letter, if it at all existed and was written by Joseph Smith, has not survived, and only a copy of the letter as published by John C. Bennett in the Sangamo Journal is extant. Without access to the original, it is impossible to fully determine how much of the letter is authentic, and how much of it was concocted by Bennett. For historical background on the letter, See Brian C. Hales, Joseph Smith’s Polygamy, Volume 1: History (Salt Lake City, Utah: Greg Kofford Books, 2013), 477–483.