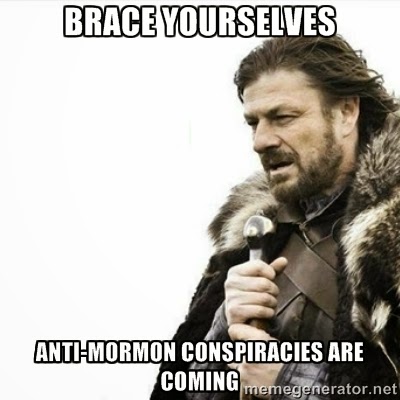 I am eager to see the conspiracies from ex- and anti-Mormons at places like RfM and Reddit trying explain how the “TSCC” wiggled its way out this one. No doubt they’ll be something along these lines:

“Well, obviously LD$ Inc. is just a powerful, rich corporation that was able to buy off the British courts with savvy, expensive lawyers.”

Does anyone want to take me up on a bet that this will be the leading excuse?

But for any ex- or anti-Mormons who are disappointed that their bullying has been halted, never fear. Tom Phillips has assured, “My legal team will leave no stone unturned. . . . I look forward to the day, and it will be soon, when the LDS Corporation is brought to justice.”

The best response I’ve read to this comes from a participant on the ex-Mormon Reddit board. “This release reads like a post Oct 23rd, 1844 Millerite tract.”

Phillips needs to learn how to be a gracious loser. Of course he can’t, since he has too much emotionally and financially invested in this, but he should.

P.S. remember this post of mine? Well, here it is again.