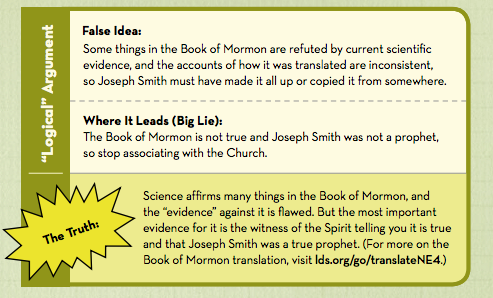 The Church’s devious attempts to suppress the naked truth of Joseph Smith’s fraud and deception continues unabated. For example, next month’s New Era includes an article by David A. Edwards titled “True or False.” “If you’ve ever taken a test with true-or-false questions, you know it’s sometimes hard to spot a falsehood,” begins Edwards. “Likewise, in the big questions of faith, belief, and everyday living, while it is extremely important to be able to tell the difference between what’s true and what isn’t, it’s not always easy.” Edwards then proceeds to give examples of how to identify a “simple untruth,” a “partial truth,” a “false dichotomy,” and a “‘logical’ argument,” the latter consisting of “reasonable-sounding but often faulty evidence in order to lead to a specific mistaken conclusion.” The example Edwards gives for his category “‘logical’ argument” is interesting.

Did you catch that? The New Era recommends its teenage readers to go to this article to find out more about the translation of the Book of Mormon. You know, the article that mentions the following.

The other instrument, which Joseph Smith discovered in the ground years before he retrieved the gold plates, was a small oval stone, or “seer stone.” As a young man during the 1820s, Joseph Smith, like others in his day, used a seer stone to look for lost objects and buried treasure. As Joseph grew to understand his prophetic calling, he learned that he could use this stone for the higher purpose of translating scripture.

I’ve heard anti-Mormons on the Internet begrudgingly concede that the Church has addressed this issue, but then quickly follow up with something like, “Well, yeah, but it’s buried on some website. It’s not being featured on the main LDS.org website or in any Church publications. So Church leaders are still hiding things!”

Leaving aside the fact that the Church now features the Gospel Topics sub-webpage prominently on its home page (see below), I find it ironic that online critics (including no shortage of atheistic critics) have adopted a sort of “anti-Mormonism of the gaps” theory. That is to say, critics immediately assume that any perceived neglect to mention the Gospel Topics essays or the subjects addressed therein to as wide an audience as possible must be proof of Church leaders’ dishonesty or duplicity, and not merely, say, the result of the sort of bureaucratic inertia one would reasonably expect in an entity as large as the Church. Problem is, as the subjects addressed by the Gospel Topics essays gain more prominence in Church publications, the critics are quickly running out of space in their gaps to assume sinister motives by Church leaders. What’s more, as a friend of mine explains, “The boundaries of criticism for the critics are retreating. They won’t be able to surprise people with these things. They will have to argue their position with youth that are already familiar with these issues.” This latest example from the New Era squeezes that gap a little tighter for these conspiracy theorists.