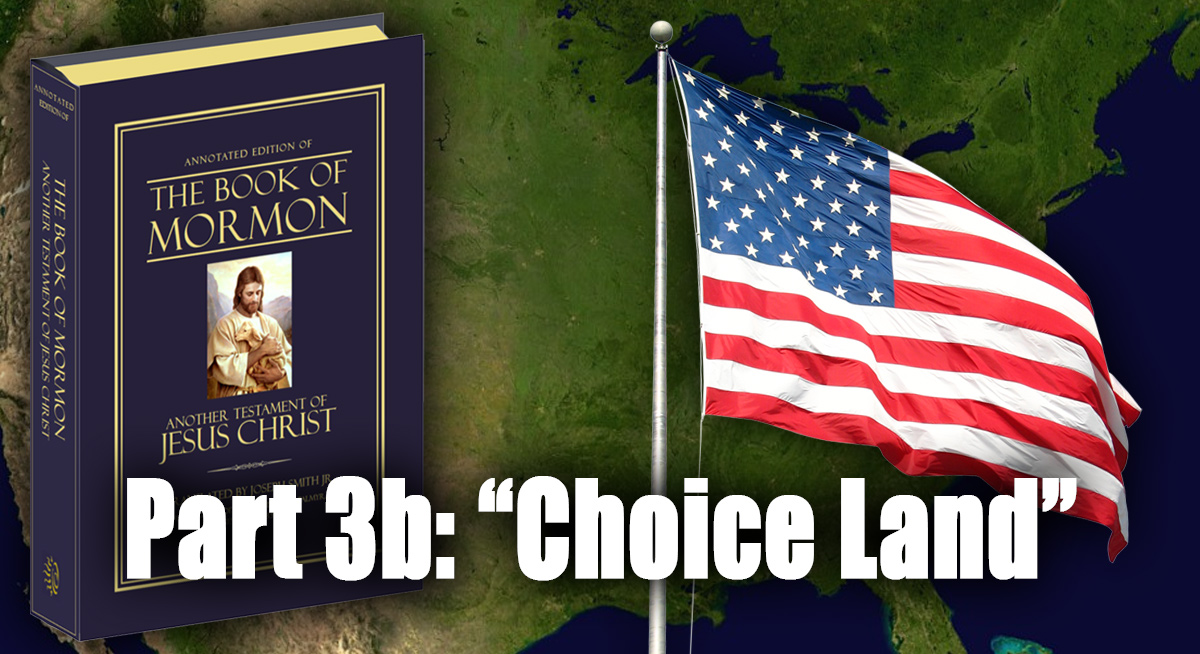 Zion, America, and the “Choice Land”

On April 8, 1844 during a Church conference the Prophet Joseph Smith announced a revelation that all America was Zion. The Manuscript History of Joseph Smith records the following:

You know very well that the Lord has led this Church by revelation. I have another revelation in relation to economy in the church— a great, grand, and glorious revelation. I shall not be able to dwell as largely upon it now, as at some other time; but I will give you the first principles. You know there has been great discussion in relation to Zion; where it is, and when the gathering of the dispensation is, and which I am now going to tell you. The Prophets have spoken and written upon it, but I will make a proclamation that will cover a broader ground. The whole of America is Zion itself from north to south, and is described by the prophets, who declare that it is Zion where the mountain of the Lord should be, and that it should be in the center of the land.1

In a bold effort to redefine the Prophet’s meaning, the editors of the Annotated Edition of the Book of Mormon (AEBOM) parse the Prophet’s words as follows (with their additions in brackets): “The whole of America is Zion itself from north [Northern States forming the Union] to south [Southern States forming Confederacy]” (415). Lest the reader of the AEBOM somehow miss the point, the editors provide a map of the United States in 1844 with the words “North” and “South” in their respective position over what would become Union and Confederate States, with Independence, Missouri circled next to the words “in the center of the land.”

This interpretation of the Prophet’s teachings restricting Zion to the borders of the United States is not only deeply problematic from a historical viewpoint (Missouri was not in the center of the United States in 1844), but contradicted by those who heard, recorded, and responded to the Prophet’s words. It also contradicts subsequent teachings of Latter-day Saint prophet and apostles.

We have four contemporary accounts of this teaching from William Clayton, Wilford Woodruff, Thomas Bullock and Willard Richard, all of whom recorded the Prophet’s words on that day. They read as follows:

The editors of the AEBOM reference the entry from Joseph Smith’s manuscript history, but fail to notice the significant entry for the following day. On April 9, Brigham Young referred to the Prophet’s announcement the previous day and spoke of it as follows:

It was a perfect sweepstakes when the prophet called North and South America Zion. Let us go to and build the Temple with all our mights that we may build up the kingdom when established and her cords lengthened. It is a perfect knock down to the devils kingdom. There is not a faithful Elder who cannot if he is humble and diligent build up a church; there are many men will give you large sums to build a stake of Zion where they live, it proves the words of the Prophet of the last days.6

I never knew one < a > proclamation to be understood at once. President B. Young wished to draw the attention of the brethren, first to build the Temple, and get your washings, anointings and endowments; after that to build up branches throughout the nations. We must do all we can to build the Temple, and after that to build up Churches; the gathering will continue here until the Temple is so far finished that the Elders can get their endowments and after that the gathering will be from the nations to North and South America, which is the land of Zion. North and South America are the symbols of the wings; the gathering from the old countries will always be to head quarters, and I have no doubt this conference will do a great deal of good.7

Just a few months after the martyrdom of the Prophet Joseph and his brother Hyrum, Brigham Young also taught:

I will give you the key, North and South America is Zion and as soon as the temple is done and you get your endowment you can go and build up stakes but don’t be in haste. Wait until the Lord says go . . . . You may go all over North and South America & build up stakes when the time comes. The continent of America must be organized into districts and Presiding elders appointed in each district.8

Elder Erastus Snow, another contemporary, explained how the Prophet’s 1844 teaching expanded the Saints initial views of Zion and its meaning. “The time was, in the infancy of the Church, when our minds were so narrow compared to what they are now,” however, “our minds grew, and our ideas enlarged, we began to perceive that we were only children in our views and feelings, our ideas and expectations.” At first, “our ideas of Zion were very limited. But as our minds began to grow and expand, why we began to look upon Zion as a great people, and the Stakes of Zion as numerous, and the area of the country to be inhabited by the people of Zion as this great American continent, or at least such portions of it as the Lord should consecrate for the gathering of His people. We ceased to set bounds to Zion and her Stakes.”9 This expanded understanding of Zion, revealed and taught by Joseph Smith, included the idea that all of the Americas, not just the United States, is Zion, and eventually would be built up in fulfillment of prophecy. This has been repeatedly taught by subsequent apostles and prophets of The Church of Jesus Christ of Latter-day Saints:

That President Young had the entire Western Hemisphere in mind with these comments is made clear in an 1876 letter: “I look forward to the time when settlements of the Church of Jesus Christ of Latter-day Saints will extend right through to the city of Old Mexico, and from thence on through Central America to the land where the Nephites flourished in the Golden era of their history, and the great backbone of the American continent be filled, north and south, with the cities and temples of the people of God. In this great work I anticipate the children of Nephi, of Laman and lemuel [Native Americans] will take no small part.”16

But Brigham Young was not the only contemporary of Joseph Smith to interpret the Prophet’s teaching in a hemispheric context. President Wilford Woodruff also taught that “when the Savior comes, a thousand years will be devoted to this work of redemption; and Temples will appear all over this land of Joseph—North and South America.”17 Subsequent leaders of the Church have echoed this sentiment:

Several Latter-day Saint leaders have stressed that, in addition to encompassing Zion, the span of the North and South American continent(s) is included in the prophetic promises of the Book of Mormon concerning the “choice land” of liberty and freedom. Orson Pratt, in his influential early missionary tract favorably utilized by Joseph Smith,22 taught that “the Lord gave unto [Lehi’s seed] the whole continent, for a land of promise, and he promised, that they, and their children after them, should inherit it, on condition of their obedience to his commandments.”23 Pratt read the Book of Mormon as describing Lehi and his family landing in South America, with “the Lamanites . . . dwel[ling] in South America, and the Nephites in North America,” verifying that he had the entirety of North and South America in mind with his comments.24

B. H. Roberts would articulate this same understanding some decades later, stating, “The Book of Mormon teaches that the two American continents [North and South America] are a promised land, consecrated to righteousness and to liberty, and especially dedicated to the seed of the Patriarch Joseph, son of Jacob, of Bible fame, and to the Gentile races, who shall in the last days be gathered to the land as well as the descendants of Joseph.”25

Reacting to attempts by monarchists to seize power in Mexico and other former colonies of Spain, nineteenth and early twentieth century Latter-day Saints routinely interpreted the prophecy in 2 Nephi 10 that there would be “no kings upon the land” as applying to all of North and South America.26

While statements from General Authorities can be found identifying the United States as the land of promise,27 these quotes must be viewed in light of broader Latter-day Saint discourse which extended the scope of the blessings of Lehi’s covenant throughout the Americas. Thus the remarks of Elder John A. Widtsoe, who in 1937 taught that “from Alaska on the north to the straits of Magellan in the south continent, the ‘new world,’ under the consecration of God, is blessed with freedom, and republican, not monarchical institutions.”28 Or those of Elder (later President) George Albert Smith in 1940, who explained that “this Western Hemisphere” should “be a land of liberty unto the Gentiles and that no king should dwell upon this land, but that He, the God of Heaven, would be our King and would fortify this land against all the nations, that this should be a land of peace and happiness, on condition that we would honor the God of this earth, the Father of us all.”29 Or those of President Spencer W. Kimball, who, speaking at an area conference in Monterey, Mexico in 1977, declared, “In many natural resources, the land of America is rich and will produce abundantly. This is for you [Mexican congregants], for us, and for all the good people who live upon the land of America. Protection against enemies has been promised. In all the Americas, neither kings nor emperors will combine to take the land. Great promises are given us, if we live the commandments God has given us.”30

The attempt by the editors of the AEBOM to restrict the boundaries of Zion and the Book of Mormon’s “land of promise” to only the “heartland” of the United States is at fundamental odds with what Latter-day Saint prophets and apostles have taught beginning with Joseph Smith. It signifies their nationalistic ideology and reflects a desperation to uphold such through a forced, contrived, and selective reading of the teachings of the Joseph Smith and other prophets.